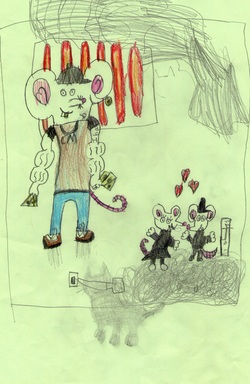 
Ideal for year 4 upwards this fun and creative experience allows everyone to take part whatever their current abilities
Our play in a day is based on one of Richard's most popular stories the 'Time Cat,' the hilarious long tale (pun intended) of a giant cat a massive mouse and a very rich mill owner.
Using great characters, funny situations and hit songs to create the most entertaining and amazing play.
We start the process with the transcript of the book which is sent to school and read by the children and teacher. As a team they then discuss their
favourite bits, characters and action followed by making notes and
recording their thoughts and ideas. They also decide if they would like to be a script writer, director, considered as a main character, a cat, one of the mice or someone who does the lights or music or the IT, etc.
Once children and their teacher have read the transcript of the book, discussed it and written their notes (approx. 2 weeks) Richard will spend a day at school working with them on turning it into a
play.
The first session with Richard is spent discussing the book and
the children's ideas and putting the book into scenes, then trying out
some people as certain characters.
Once this is done we introduce the music which Richard will bring with him. Children will then create some actions to go with the music. For example the 'Stray Cat Strut' requires a number of lazy cats just lounging around. The 'Eye of the Tiger' played before the big Cat vs Mouse bout, requires a number of fans for each.
Children decide the words they will say and help to write a storyboard/script. Then they try out different ways of telling the story and working as a team decide who will play which parts in the play. After a rehearsal they are ready to perform the play for the rest of the school.
‘Our play in a day’ the juke box musical allows children to experience the fun of turning a story into a play. Starting with an outline and structure and working as a team experience the thrill of creating a piece for
performance.
*If children need extra support the play can be done over two days.